At some point, I apparently told Azure Resource Manager to delete the VM that runs SQL for my SCOM environment running in Azure.  While I completely disagree with the portal’s interpretation of my button clicks, my VM is missing and I need it back.  Thankfully, when you delete a VM through the portal (accidentally or otherwise…or not at all and it just magically disappears), the disks are left behind in the storage account.  In this case, this is a good thing.  At least I can recover.

The documentation around the new AzureRM cmdlets still has a gap or nine, so I wasn’t able to easily dig up a script that created a VM off an existing OS disk and attach all of the data disks as well.  Using PS help and assuming the process was still somewhat like what we had to do under the older cmdlets, I put together the following script:

I needed to make sure the data disk naming and URIs matched, I was provisioning to the right region, resource group, etc.  Executing the script resulted in the following:

I forgot to attach the network adapter.  Thankfully, the delete executed by the ARM gremlins left the interface so it should be as simple as doing a reattach and then I should be good to go.  Herein lies a pretty significant issue.  It would seem with this release of Azure PowerShell, the cmdlet Add-AzureRmVMNetworkInterface has been removed.  With that, I was not able to easily figure out how to attach an existing network interface to a new VM config through PowerShell using the AzureRM cmdlets.  You can do this with a template, but I want to just bang this out and get it done.  This leaves me with 2 options:

I am guessing there is probably an additional route invoking .NET methods to create a net new profile and then assign the NIC but I will leave that research until later.  The first option would be straight forward, however, it might leave me with some cleanup in the lab afterwards (DNS, IPs, etc.).  Rather than messing with that, I decide to try the second option and steal the profile from OM01 VM and modify:

Now, if it really worked, SQL would be running and I will be able to launch SCOM.  Logging and popping open the console: 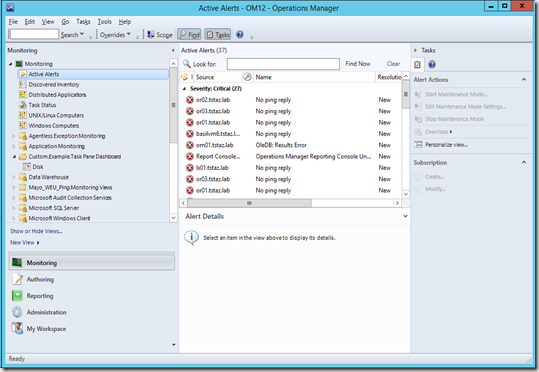